Just north of Main Strret in Fayetteville, PA lies the house known as Lee Way that was built by an eccentric character named John Buckman. Supposedly, he still haunts the house, though owners of the home in 1974 said they had never experienced anything out of the ordinary about the house.1

"He was an alcholic, a tramps and a drifter who came here in the 1890's and decided to stay," says mrs. Wingert, while digging at the ivy that covers his gravestone. "He was an alcohloic", she repeats, "who one night reached for his bottle, but instead grabbed some carbolic acid." The apparently mistaken bottle contributed significantly to Buckman's demise.

Captain Buckman, Living Along Chambersburg Pike Near Fayettesville Dies With Much of his Life Shrouded in Mystery.

Captain John Buckman died at 6 o'clock Tuesday morning at his farm east of Fayettesville along the PIke, "The Leeway". Sunday night he got up from bed and went to a cupboard to get a drink of whiskey from a bottle he kept there. One of his housekeepers had moved the flask in cleaning and he picked up a bottle of carbolic acid and two two ounces of it. Despite medical attention which brought him from unconsciousness, he was too badly injured to recover.

This ends the life of one of the most mysterious characters ever known about here. His real name is known to but a few people in this locality and they will not tell it. He came orignially, he had said, from Boston and served in the United States Navy during the Rebellion, under Admiral Farragut, under Fighting Bob Evans and Dewey. He later got into the mercantile marine and toured the world several times, having a very eventful life.

He came to this section about 26 to 28 years ago practically penniless but soon he seemed to get money and it turned out that he was getting a pension of $24 a month. He soon bought the farm east of Fayettesville, about 150 acres and built, 20 years ago, the handsome residence now on it.

About 18 years ago a middle aged woman and a younger one arrived and hired a man to haul them and their baggage to Captain Buckman's. The Captain met them on his porch and they had a talk, loud and bitter. He refused them admittance and they returned to the depot. They said they were teh wife and daughter of Buckman and had come from Kentucky to make their home with him but he had sent them off. It is thought that they are still living. If so the estate will likely be claimed by them.

Although Captain Buckman was about 80 years of age he was vigorous and went to Chambersburg almost daily, frequently walking back and forth between his home and that place and would readily have passed for a man of not much over sixty. He would not say much about himself and although it was known that he had a very animated and interesting career he wuld not talk of it.

Maybe he still is searching for his missing bottle of whiskey. 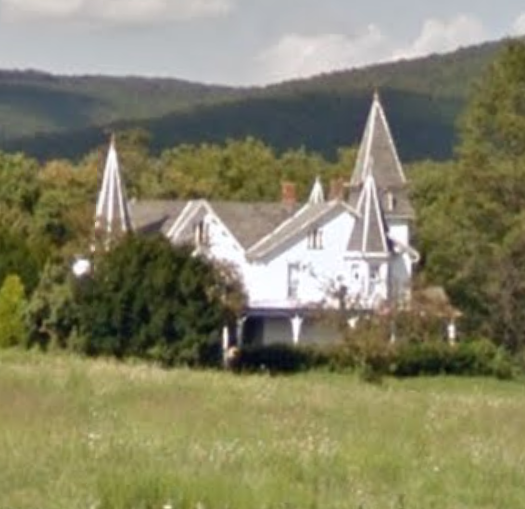