While many of the older inns in Chester County have had all sorts of stories circulated about them over the years, few have gathered as much interest as those concerning the old Blue Ball Inn and its best known inn keeper, Priscilla 'Prissy' Robinson.

The Inn was also known as the 'Half-way House' but more often as the 'Blue Ball' when it was first established in 1735 along the old Lancaster Road in Tredyffrin township near the Easttown border. At that point it was under the control of Robert Richardson. In 1741, it passed into the hands of Thomas McKean, uncle to the future Governor, who held it until 1752. The next owner, Conrad Young, ran it for the next few years under the name of the 'King of Prussia' until turning it over in 1757 to Joseph Wilkinson and the name reverted to the 'Blue Ball'.

In 1759, Bernhard Van Leer, one of my direct ancestors, bought the property and it remained in his family well into the early 1800's, though its management changed often in those years. In 1760, it was leased to Benjamin Weatherby who ran it until 1766 when its managed was continued by his widow. Several other innkeepers took care of the property over the next years, until the death of Van Leer in 1786, at which point, the Inn passed to his daughter, Mary and her husband, Moses Moore. Just before the end of the century, the new turnpike cut off access to the original inn and the existing structure was built directly facing the new turnpike. It was shortly after this that Prissy, daughter of Mary and Moses Moore, took over the ownership of the Inn.

Though she was married three different times, to Edward Robinson, John Cahill and John Fisher respectively, Prissy was always known as Mrs. Robinson. All three husbands vanished under what has been called 'mysterious circumstances' and, over the years of Prissy's management, numerous other stories were told of strange happenings at the Blue Ball. Many of these tales deal with people who stopped at the Inn and were never seen again, mostly peddlers and tinkers. Whether the stories are true or not, the fact remains that after the sale of the house in 1894, the new owners began the process of renovating the old inn. No doubt, they were rather surprised when 6 skeletons were found in the cellar beneath the old kitchen and a seventh out in the orchard! An article in the Philadelphia Inquirer stated that although some of the skeletons showed broken bones or cleft skulls, they were complete and intact.

From Julius Sasche's Devon, written in the early part of the 1900's, we can get a taste of the local opinion of the Blue Ball:

'..This was formerly Prissy Robinson's Blue Ball Tavern, and of the tales current in the neighborhood about the house and its weird owner a volume could be written. Catering to the lowest dregs of humanity who frequented the turnpike, quarrels and brawls were always rife, and the many stories of mysterious disappearances seem to have found confirmation in 1877, when the workmen on the railroad unearthed a number of un-coffined human remains in the old tavern orchard.

A characteristic anecdote of old Prissy is told. When in the early days of the State Railroad, a locomotive struck her heifer and killed it, she demanded compensation from the State Canal Collector at Paoli. Her request was curtly refused with the caution to keep her cattle off the track in the future. Prissy vowed vengeance, and on her return home took the tallow from the heifer's carcass and spread it on the rails the first dark night. This was in the days before locomotives were supplied with sand boxes, and as a consequence the train remained there until morning, when the cause was discovered. It may be added that Prissy's claim was paid before the day had passed.'

Stories about the Blue Ball Inn and its harsh mistress have been told for years, though some would probably like to play down the supernatural aspects, the fact remains that the stories remain popular. As early as 1939, former resident of the Inn for over 50 years, Mary Croasdale, wrote in an article for the local historic group, 'People were afraid of her and the house grew to have the reputation for being haunted.' Even though Ms. Croasdale downplayed the stories publicly, she did admit privately that some things had happened, such as dresser drawers opening and closing by themselves in empty rooms.

Back in 1984, Med Galy Twaddell's book Inns, Tales and Taverns of Chester County was published and included the Blue Ball in the collection. Among other interesting tidbits about the property was the fact that there was an antique account book for the land and the Inn that had existed since 1714, and according to the tradition, something terrible wil happen if the book is ever removed from the property. 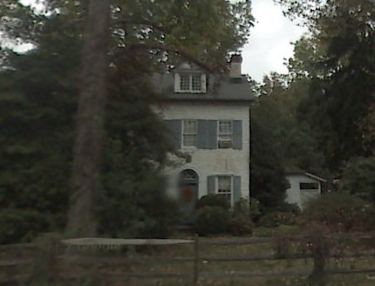