Murder on the old National Pike

Growing up outside of Baltimore, we knew US Route 40 well and just referred to it as "Route 40" or "Forty West". Years earlier though, it was better known as the "National Road" or "Old National Pike". Along the side of the major highway that covers most of the original territory of the National Pike, the orignal road still appears from time to time, running next to its modern replacement. That old road was the scene of more than a few wild moments on the history of the area. The old National Hotel, shown here in a postcard from 1909 and torn down a number of years ago, may or may not have been known to be haunted, but, based on its history, it would not have surprised me.

By 1836, a man named John Layman (or Lehman) had established a tavern on the site, replacing an older structure. Layman died in 1845 and his tavern was then run by Henry Fuller, who, in turn, tore it down to replace it with a more modern structure, and it began to resemble the building in our old postcard. But rather than following the history of the Hotel, it's more interesting to take a look at the families in the area that were connected to the old taverns of the National Road.

John Lehman's wife was a woman named Nancy, whose mother Sally Wooten (or Wooding) was a barkeeper in her own right. John was Nancy's second husband, her first spouse having come to an unexpected demise in 1833. Nancy and her sister Sarah married a pair of borthers, John and Peter Yeast, respectively and both families were involved in the tavern trade of the area. Despite being known as a strong, healthy man, John Yeast was in his thirties when he died suddenly. By 1845, Nancy's second husband, the aforementioned John Lehman was also dead, his death said to have been caused by cancer. Next up for bats was Samuel Hufford, who pssed on in 1848, supposedly after eating a piece of pumpkin pie. Their marriage took in January of that year. Her fourth, and final, husband, was Holmes Oliver Wiley. But, before that marriage took place,our gal Nancy was indicted for the murder of Rebecca Engle, the second of wife of Samuel Engle!

Nancy had been asked to nurse Rebecca in the late days of her pregnancy, but poor Rebecca barely survived the birth of her child. Though the death was investigated, the clues were somewhat circumstantial and Nancy ended up being acquitted. After the trial was over and Nancy had walked away a free woman, a bottle of arsenic was found in a cupboard in the Engle house. Surprise, surprise!

Nancy married Holmes Wiley in 1862 and the rest of her life was apparently relatively uneventful. Both of them are buired in the Wiley private cemeteery near Grantsville, though their graves are marked only with fieldstones. 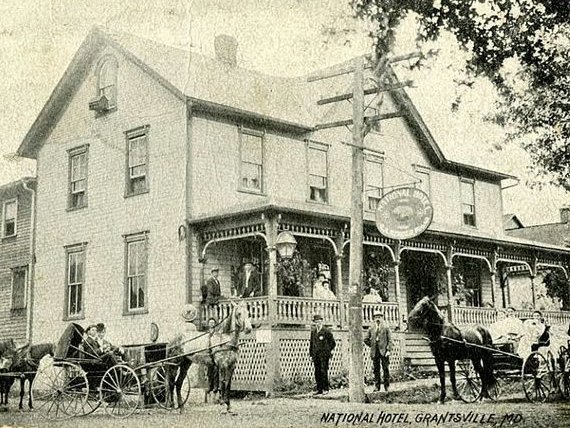