Mt. Ida in Ellicott City, which serves as the visitor center for the Patapsco Female Institute, was originally the home of William Ellicott, grandson of Andrew Ellicott, one of the founders of the town. William barely had time to enjoy his new home, however, as he died in 1836, just 43 years old. The home then passed to the family of Judge John Shoemaker Tyson with his wife Rachel (Snowden) and their four children: Cornelia, John Snowden, Anne and Ida. Judge Tyson died in 1864, leaving the home to Rachel and the children. The 1890's saw the passing of Rachel, John Snowden, Cornelia and Ann, leaving only Ida behind.

Apparently, Ida lived there alone for quite some time, using a cane to help get around and an ear horn to hear better. She carried a large ring of keys with her at all time and was fastidious about the upkeep of the house. To this day, visitors have heard the sounds of her keys jingling or the occasion creaking of a floor board.

For the sake of accuracy, it should be pointed out that most online stories related to Mt. Ida incorrectly list the Judge's name as John Snowden Tyson, but his actual middle name is Shoemaker; John Snowden is his son. Both the Shoemaker and the Tyson families originally settled in the Germantown area of Montgomery county, PA and have many illustrious descendants. Some of the family roots can be seen here. 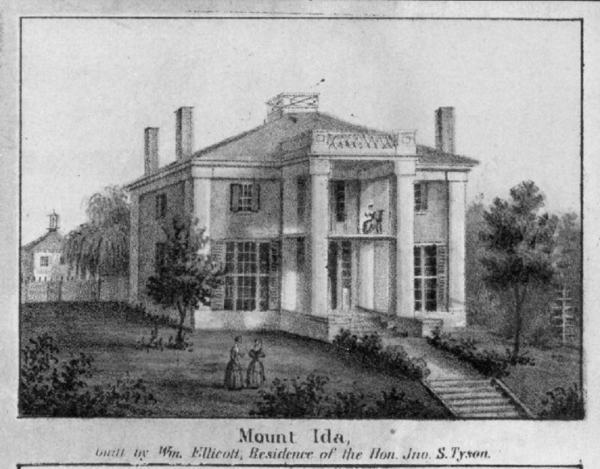