Over the years, this upscale restaurant at 217 South Street in Morristown, New Jersey has had its fair share of strange happenings and the property has changed hands many times. Until its fairly recent demolition in order to make way for a bank, it has been Jimmy's Haunt, a very appropriate name.

My interest in the story of Jimmy's started when I realized several things - one, that I had probably been in the place years ago when my older brother lived in Morristown for awhile, and two, one of the victims of the crime, Samuel Sayre, is from a family that has ties to some of my own ancestral lines, as well as a connection to the founding family of New Windsor, the town in which I live.

The house was originally built in 1749 as a home for the John Sayre family and it was a peaceful home until 1833, When Samuel Sayre, the current owner, hired Antoine LeBlanc to do some work in the home. On May 11, 1833, Samuel and his wife Sarah, as well as a young girl named Phoebe who worked in the house, were brutally murdered by LeBlanc. Apparently, LeBlanc enticed the Sayres into the barn and then used a ax to kill them, hiding their bodies under a manure pile in the barn,and then returned to the house and did in Phoebe, the maid.

LeBlanc was soon apprehended and his trial date set. There was little question of his guilt and he was sentenced to death; his execution in December of 1883 was the last hanging to take place on the Green in Morristown. His execution drew huge crowds and apparently, it was decided somewhere along the line to tan his hide and make the pieces available to those who wished to purchase a commemorative of the event. These skin pieces were then used to create such things as lampshade and wallets! "A half century later, when Morristown had grown into a fashionable country place for the rich and the cultured, a civic-minded citizen named A.W. Cutler made a hit at a YMCA fundraiser by exhibiting, alongside a goblet that had been Napoleon's and a necklace that had been Josephine's, one authentic Antoine LeBlanc wallet." (source: The Lawton Constitution, 1/29/1978, page 13A).

BONES OF A MURDERER

Found at Morristown - Their Owner Killed A Woman

New York, July 19. In digging the excavation for the foundation of the new Morris county Court House at Morristown, the workmen uncovered a box containing human bones. It is believed the remains are those of Antoine LeBlanc, a Frenchman. LeBlance murdered Samuel Sayre, Sayre's wife Sarah, and a colored woman employed by Sayre. The murder was committed on the night of May 11, 1833.

LeBlanc was tried and sentenced to be hanged. The gallows were erected in the center of the park, and on September 6th of the same year of the murder, LeBlanc was hanged in full view of several thousand people. Isaac Canfield, a surgeon, dissected the body and the skin was tanned. Many residents of Morristown have in their possession pieces of the tanned skin. What remained of the body was placed in a box and buried in the rear of the court house.

After the Sayre family's occupancy, the house was owned for many years by the Ledgerwood family, and it was often used for civic and political functions of the day. At some point during the Ledgerwood  years, one of the inhabitants committed suicide on the premises, which no doubt only added to the ambiance.

In 1947, Edward Winchester bought the property and it was renamed the Winchester Turnpike Inn as he added a restaurant and taproom to the property. A fire on the property in October of 1957 resulted in injuries to about 25 people, working all night to pur out the blaze.

The next owner was WIlliam McCausland in 1960, who converted the upstairs in to banquet facilities, though Phoebe's rooms reamined notoriously chilly. Candles had a way of lighting themselves in the room as well. 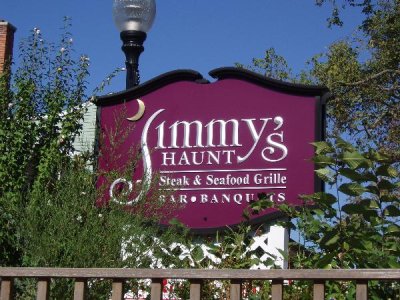