The Emlen Physick Estate is one of the more unusual properties in Cape May, and, of course, it should be no surprise to hear that there are spirits there as well. They seem to be benign, like most of the spirits in Cape May. One is said to be Frances Ralston, Dr. Physick's wife, but more prominent in the house is his Aunt Emilie.

Trying to find out more about the Physick family that lived in the house proved to be a rather challenging project. As it turns out, Dr. Emlen Physick was actually Dr. Emlen, Jr., his father having died just a few years after his son's birth. So far, so good. A trip to the net archives for more info eventually turned up an interesting record from the legal files, in which Emlen, Jr.'s mother appealed to the courts regarding the will of her late husband's uncle, Samuel Emlen. What made the record interesting was that it mentioned that Frances Mary Parmentier, Emlen's mother, was never actually married to his father, though there was also a document filed in 1857 to legitimize him in the eyes of the law. Apparently, Emlen the Elder and Frances had three children together: a daughter named Susan Emlen Physick, born in 1852 but died in 1856; Emlen, Jr., born 6/5/1855; a daughter named Ellen Elizabeth, born 8/6/1857. Ellen E. died in 1862 and she and her sister were buried with their father at Ronaldson's cemetery (and later transferred to Forest Hills).

As an interesting side note, Emlen, Jr.'s grandfather, the noted physician, apparently legally separated from his wife after 1815. A book discussing women's health had a very long article about Susan Emlen, a relation of Emlen's grandmother, which noted that the separation is believed to have come about because Philip was interested in the family maid and his wife was too fond of one of their nephews. OK, then.

Meanwhile, back in Cape May, somewhere along the line, Emlen's mother remarries a Mr. Ralston, but we learn nothing at all about him. She, her two sisters, Emilie and Isabella, and Emlen are all living in the house that he had built in 1879.

Just to make things more confusing, the 1850 census in Philadelphia turns up this grouping:

As far as I can figure, Ellenor Hart is the head of household and likely Ellen Parmentier's mother. Mr. Parmentier is apparently deceased, leaving 4 children: Frances (already married at this point to George Sawtell), Charles, Isabella and Emily.

Another legal document, this time the Law Review, mentions that Frances had been married to a Mr. Swatell but divorced him by 1851, the expenses for the divorce being paid for by Emlen.  Frances being married early makes sense, as she is often described as having been married twice and widowed twice. She was married to Sawtell and Ralston, and widowed by Physick and Ralston.

Charles, the brother, apparently, was a carpenter and lived in Philadelphia with his wife Elizabeth and two daughters, Ellen E., and Mary. He died in 1903 and is buried at Northwood.

And then I find a bit online that mentions that sister Isabella is an epileptic and is confined to the upper floors of the house in a wheelchair. This actually did not go on for very long through, as Isabella died in 1881, only two years after the house was built. She is buried next to her sister and Emlen in the Coldspring burying ground in Cape May

Frances died in 1915, and Emlen in 1916. I haven't had any luck yet figuring out where Frances was buried. Find-A-Grave does not list her in Cold Spring, but that's not conclusive. Maybe she's with Mr. Ralston, wherever he may be. The last one to go was Emilie in 1935, and for the next thirty years the house was empty more often than not until the Mid-Atlantic Center for the Arts savad it from the wrecking ball in 1970.

One way or another, there's enough drama in this family to generate all sorts of activity in the old house! 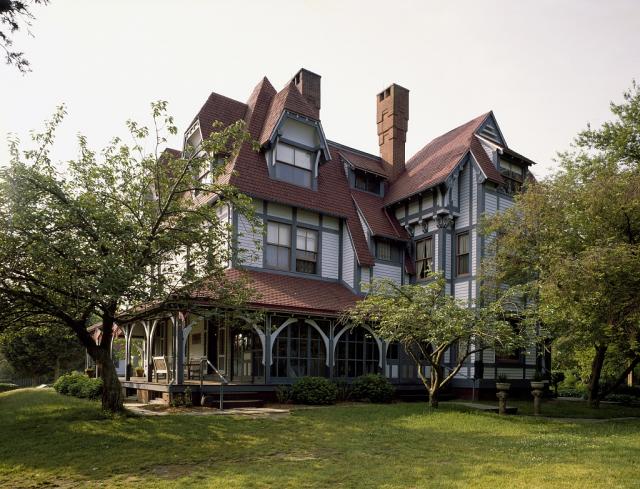