Sitting on the side of Mount Penn, near the junction of Hill Road and the appropriately-named Spook Lane, Stokesay Castle has graced the Reading landscape for many years as a fine restaurant. Catering to a high-dollar crowd, Stokesay has always been a popular site for wedding receptions. But some folks have said it has a bit more spirit than some like. True or not, the Castle is an intriguing place and would be of interest to me even if I weren't a distant cousin of the guy that built it!

Stokesay was built in 1931 by George Baer Hiester and was intended to be a replica of the castle by the same name in England. lt was designed to be a honeymoon present for his new bride, but things didn't quite work out the way George planned. Coming from a upper class background, the money to build his dream castle was not a problem for George. Born in 1909, George's family, on both his father's side as well as his mother's side, were quite used to the finer things in life, and no doubt, George had every expectation for a life filled with every comfort. His dream castle, so carefully built as a honeymoon cottage to please his bride Anne, apparently had just the opposite effect. For whatever reason, she just didn't like it and so, it served as an occasional summer party house until George finally sold it in 1956.

Though the website for Stokesday only gives a brief history, the local story is a bit different. George's bride not only did not like the place, it drove her crazy, literally. Ten years after pouring his heart and soul in to building his dream castle, we find George enlisting in the armed services, a divorced man with three children. George B. Hiester and Anne Nicolls were married in November of 1931 and headed out to Bermuda for their honeymoon. Though George was to take many trips over the next several years, this appears to be perhaps the only time he and his wife traveled together. Anne died in 1949 and George died in 1962 - it is unknown if either of them remarried after their divorce. Who haunts Stokesay? Is it George or his wife? Or someone else entirely? 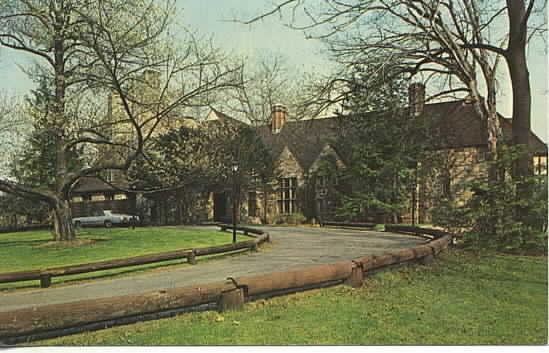