Looking at the Seven Stars Inn as a potentially haunted site gets very confusing very quickly, as there were several inns in the area that carried the name of the Seven Stars at various times. This was the common practice of years ago, when the name of an inn went with the inn-keeper and they didn't alway stay in the name place for very long.

One of the basic stories attributed to the haunting of the Seven Stars is that the 85-year-old widow of one of the early owners, Benjamin Brownback, was murdered. It remained an unsolved crime, which would, naturally lead to a nice background for a haunting. But, we have a bit of a problem here. Yes, Rachel Parker was the wife of Benjamin Brownback and she was murdered in 1837, but it didn't happen here. The inn that is known today as the Seven Stars was not the inn that the Brownback family opened and ran for years, though this one does go back to about the same point in history.

In 1736, Gerhard Brumbach petitioned for a license to open an inn on what is now Route 23 in East Vincent township. That building, once known as the Brownback Inn, still stands at the intersection of Route 23 and Ellis Woods Road. It was an active inn until 1845.

About a mile to the east, Michael Cypher opened his own inn and store in 1754, that eventually became the modern day Seven Stars Inn. It was initally known as Cypher's Ancient Inn and did not became the Seven Stars until it was so named by innkeeper John Baker in 1804. Even then the name changed a few times for the next few decades, but by the late 1830's it was stabilized as the Seven Stars Inn.

A medium who visited the inn told of a male spirit in a back bedroom that now serves as a dining room, and a worker at the inn told of seeing a young person wearing what appeared to be riding clothes, but neither of these sound anything like an 85-year-old murder victim. We'll have to keep looking for a cause for these, since it's more likely that Rachel is haunting her old home about a mile to the west. 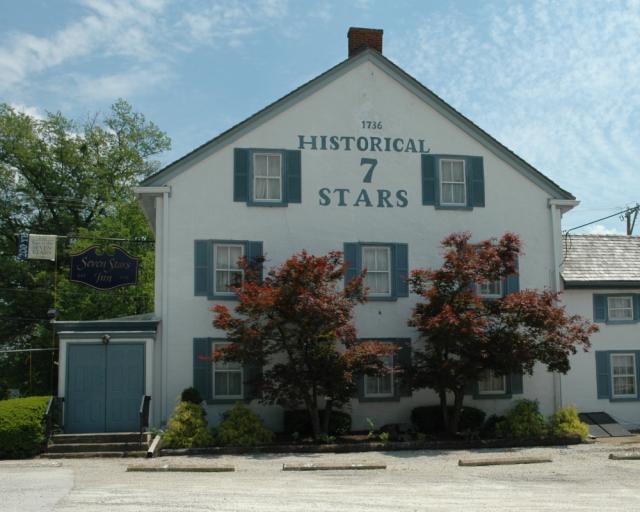