Those who visit the inn and stay in room 23 may encounter the vision of a ghostly female in the bathroom mirror. As this was once the bedchamber of Mrs. Sayre, it has been suggested that the ghost is hers, but that raises another question - which Mrs. Sayre is it? Robert Sayre was married four times, though only had children by the first wife and the last one. Martha Finley Nevin married Robert in 1882 and had three boys, John Nevin, Francis Bowes and Cecil Nevin. The middle son, Francis Bowes Sayre, added his own bit of fame to the family when he married President Wilson's daughter, Jessie in 1913.

Room 32 on the third floor, once the area used by the family staff and the children, also has had its share of reports, as visitors have noted a dark shape that seems to come out of the wall. The youngest Sayre son, Cecil, only lived for a year, so perhaps it is his spirit that remains in the room.

When Sayre had his mansion built, it was the first home in the section that would become known as Fountain Hill, a neighborhood filled with luxurious homes. As the chief engineer of the Lehigh Valley Railroad, Sayre wanted to be close to the railroad's headquarters, which is right around the corner from his spacious home. Sayre was also instrumental in developing the Bethlehem Iron Works (which would become Bethlehem Steel), and was an original trustee of the Lehigh University and founder of the St. Luke's Hospital. In 1899, a 2-story wing was added to the house to hold his extensive library.

In the years following Robert's death, his children having established homes of theirown, the house passed out of Sayre hands and was broken into apartments. By the 1990's, it stood on teh brink of destruction, but in teh time since then it has undergone an enormous restoration and is now a very high-end inn.

It should also be added that this is not the only Sayre house in our collection - New Jersey also has a haunted Sayre connection in Morris County, though that one is no longer standing 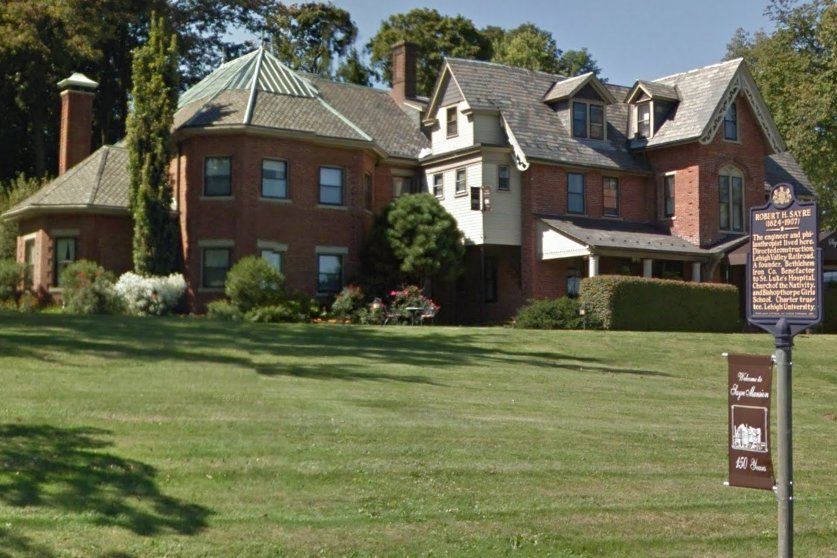