Even before the Red Rose Inn in Jennersville gained a reputation for being a 'spirited place', it already had an interesting history. The tract of land on which the Inn stands was once part of a parcel given to William Penn by King Charles of England and was known as "No Man's Land", as it was placed between the existing lands of William Penn and those of Lord Baltimore. The property was first leased in the 1730's with the annual payment to be made each June 24th of a single rose, and hence, the name of the Inn in modern times.

The legends surrounding the Inn date from its early history when the innkeeper's young daughter was brutally murdered and the settlers in town immediately accused a local Indian who had been seen giving the young girl a string of beads just hours before her death. Without benefit of any kind of real trial, the locals seized the hapless Indian and hanged him. Hours later, the real murderer was found, drunk and unconscious in the woods behind the the Inn, but the discovery was far too late to help poor Joe the Indian. As the story goes, the locals wrapped the Indian in white sheeting and buried him in the walls of the Inn's cellar so the sight of his grave would not serve to constantly remind them of their guilt in his demise. Supposedly, it is his ghost that is heard walking the rooms of the Inn, seeking a way out.

In the early 1980's, a pair of parapsychologists for Temple University visited the Inn and without knowing the history of the place at all, told Mrs. Bussey, then co-owner of the Inn, that there were two spirits in the Inn, one a male that hey sensed to be an Indian, and the another a young girl, presumably Emily, the young murdered girl.

Apparently, despite feeling that the ghosts were harmless, the Bussey family moved on to less 'spirited' grounds and the ownership of the Inn was handed over to Lee Covatta and her son Tony, who have also had their own experiences with the Red Rose Inn's spirits.

A number of years, it appeared that the Inn property mightbe in danger of demolition, but it was subsequently purchased by the township and is currently in the process of renovation. 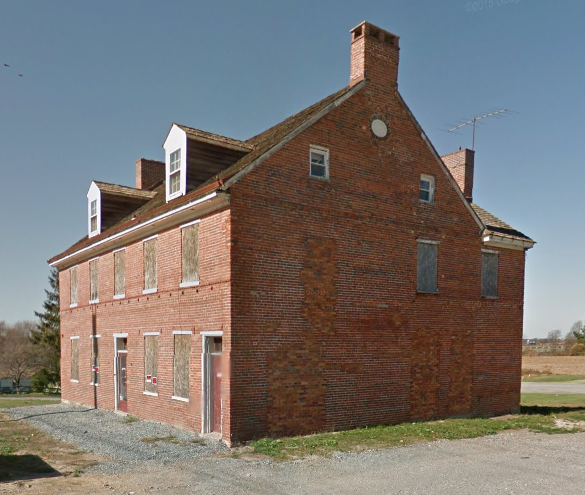