An old Quaker meetinghouse in Camden , New Jersey was the scene of numerous ghost sightings about a hundred and twenty years ago.  The following article about the ghost is quite long, but it gives a good bit of information about the location of the meeting house and its cemetery.

Some Of Its Queer Antics

Many People Have Seen It, Some Of Them, Including Cabman Harris and His Girl, to their Sorrow

For the past three weeks the residents of the southern part of Camden, in the vicinity of the cemetery at Haddonfield Pike and Walnut St, has been terrorized by a Quaker ghost which frequents the cemetery and Quaker meeting house.

Men as well as women have been scared into hysterics by this uncanny spectre and the utmost excitement prevails in the neighborhood. Husbands are afraid to go away from their homes at night, doubting the safety of the family and children are not allowed by their parents to play in the Quaker yard. Just mention the ghost to them and they are only too willing to stay inddors.

The ghost was first seen on Monday night two weeks ago by Samuel Harris, a young cabman at No. 101 North Second street. He was out walking with a young woman that night, and when in front of the Quaker meeting house the couple sat down in the grass for a rest. While there, Harris heard a slight noise behind him and looking around was horrified to see a ghost. He described it as being about six feet tall and slightly stooped. The apparition seemed to be a figure enveloped in a large white sheet and looked like a Quaker. As soon as he could collect his senses he jumped up and taking hold of the young girl's hand started to run. After he had gone a few yards he halted and turned around only to find the ghost-like spectre a short distance.

He stopped drawing a revolver from his pocket called to the phantom to halt. Just then his girl fell tot  the ground in a faint and he devoted his efforts  towards reviving her. This he finally succeed in doing and they started for the girl's home at 526 Cedar street, by way of Mount Ephrain pike. They had gone as far as the Browning road unmolested and had begun to talk about their escape from the ghost,when the girl happened to look up and screamed, "There's the ghost!"

Harris quickly pulled the revolver and taking deliberate aim, fired at the figure, which was about twenty feet away from them, but when the smoke cleared away no signs of the ghost could be seen.

A similar experience was met with by young George Sparks, who lives at 217 Benson street, who was out during Tuesday night. He said while returning from Haddonfield in a carriage and when neraly opposite the gates of the cemetery a phantom-like object glided swiftly out into the middle of the road and began to turn round and round on its feet. The horse shied back and would have overturned the carriage if Sparks had not jumped out  and caught him by the head. The ghost was standing in the middle of the road, not five feet ahead of him.

"I grabbed my whip and sprang forward toward the spectre, but had not taken two steps when I was overcome by some mysterious feeling which made me feel powerless to move. I stood staring at the object before me when suddenly the phantom disappeared and I was rudely shaken on by the shoulder by an officer who asked me what was the matter. "The ghost! the ghost!," I gasped out, "he paralyzed me.'

The officer, who was a big, tall man began to laugh out loud, and when he had finished his fit of merriment said: 'Why you --fool, that's the old Quaker ghost. He won't harm you. He's all the time prowling round here.'

"After I had finished talking with the officer I started for Sam Davis' livery and than went home, I took a vow that I'd never go by that cemetery again, and you can see I haven't got over the shock yet, can't you?" Sparks looked to the reporter as if he had seen half a dozen ghosts of some sort.

The ghost has also been seen by Mrs. Edward Moore, who lives at No. 12 Dimaond street, Coxtown, a small portion of South Camden, which is directly opposite the Quaker meeting house. She stated that last Thursady night she put her two children to bed about 8 o'clock and followed herself about an hour later. She then told her experience:

"I had heard of the ghost and, indeed, saw it several times when I was returning home from the store, and I always keep the children in after dark. I also secure the doors and windows good and tight before retiring. Well, on Thursday night, as it was very warm, I raised the window in the children's room and put a mosquito netting in the frame. About 2 o'clock in the morning I was awakened by something which I thought was a hand being run across my face, and I jumped up in a sitting posture.

"As I did so I glanced toward the foot of the bed and there I saw the dreaded Quaker ghost. I opened my mouth to scream for help, but was unable to do so. My tongue seemed to cleave to the roof of my mouth. A strange feeling passed over me, the same as I had experienced once before when I was mesmerized in a hall. There I lay, thinkng of my children, when it seemed to me, were in some trouble.

"I listened and watched the ghostly figure at the foot of my bed. Its eyes never moved from me.  I thought I could hear someone sobbing and moaning and a few times I thought I hears some one murmur 'Beware!' Suddenly I closed my eyes and realizing the peril I was in quickly opened them again and looked twoard the foot of my bed, but the ghost had gone as quietly as it had come. I sat there a second powerless to move when suddenly I heard Ellie, my little gitl, scream 'Mamma, mamma, ccome here quick; mamma for God's sake, come!'

The Ghost Kissed her Children

"The cry had the effect of making the strange feeling which had overcome me pass away, and I jumped out of bed and ran to my child's room and lit a lamp. There lay my little childen with the coverlet pulled over their eyes, scared nearly to death. When I called Nellie by name she said 'Mamma, the ghost comed up to me and kissed me on de cheek. I couldn't call you till he went out  the window.'

"When my child mentioned the window my thoughts quickly flashed back to my raising the window for air. The sash had been pushed up further and the netting removed. I looked out the window but could see no trace of the horrible looking thing, and I'll just tell you I didn't sleep a wink that night."

"I met with it once before," said Mrs. Moore. "I was coming down the lane one night about half past 11 o'clock and when I was about half way between Mr. Stokes' house and the pike the ghost jumped out in the middle of the path from behind a tree directly in front of me. I screamed for help and ran back to Tenth street and got Mr. Johasson to come as far as the house with me."

Joseph Stow, the grave digger, who has had charge of the Quaker meeting house for the past twenty years, said yesterday he had heard of the actions of the Quaker ghost, but had never seen it but once, and that was at at a distance. It was one night, about ten o'clock, a few weeks ago. He was sitting in the kitchen when startled by a woman screaming murder. He ran out and there stood a colored woman who was nearly white, she was so badly frightned.

She pointed down the road and said that a ghost had caught hold of her. Stow looked inthe direction indicated, and saw the strange object. He supposed that was the thing that raised so much racket around his house at night, but he said he was used to ghosts and spirits, as had been here among them for thirty years and more.

It sounds like this particular spirit had been hanging around the area for a while, but there doesn't seem to be any more information to be found. The meeting house in question is no longer standing, but the cemetery,now  known as the Old Camden Cemetery was orignially the Newton Friends Burying Ground. The meeting house itself was located on the northeast corner of Mt. Ephraim and Mt. Vernon avenues, with the orignial cemetery lying to the north. 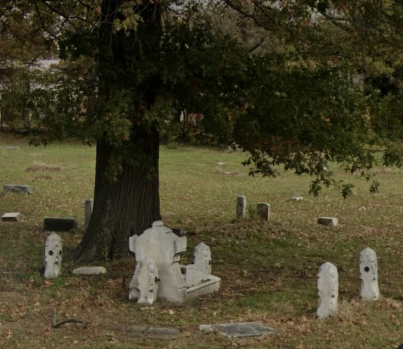