Not far from from Penn State in Centre county, PA, lies the little town of Lemont, home of the historic Lemont House and its resident ghost, Edith.

Tenants of the Lemont House will tell you about Edith Ross.

She opens and closes locked doors. She sets off motion detectors.

She still climbs the stirs of the combination general store and house she inherited from her father, Elmer.

Quite an accomplishment for a dead woman.

With Halloween here, the whote frame structire at the corner of Pike and Elmwood streets seems just the place to scare up a ghost story or two.

"I think if Edith was going to be doing anyhing, it'd be cleaning all the time," said Jane Nuss, who grew up in Lemont during the 1940s and 1950s.

Lemont folks, like Nuss, who knew Ross say if she haunts the building, it's to make sure it's well cared for.

"All she did was sweep the front porch so she could yack to anybody who came by," said Nuss. "Oh she woudl love to talk."

"I always said if I ran into Edith, that'd be all right," she said."now, Elmer, I'd be the first one oout the door."

The Elmont House was built sometime in the mid-1800s as a general store. It had many owners and shopkeepers over the years but it remained "The Clover Farm Store" to its patrons.

Edith's grandfather, J. Irving Ross, bought the structure in 1887. At his death, it passed on to his son, Elmer. When ELmer died in 1966, Edith inherited it.

Folks contacted Thursday said she died not too many yeas later, although no one remembered when.

Joe Rishel has owned the building for eleven years. He didn't know about her when he bought the place.

One night he was alone in the building working late at his business, Complete Floor Coverings of Lemont. The building's locked back door opened and closed, so Rishel got up to see who it ws.

Then he felt what he calls "a cold presence."

Tenants have reported to Rishel they've heard a voice call "Are you there/"" when working late at night on the seconfd floor. Others, like Rishell, have felt the cold rush.

Edith's picture hangs on the wall next to the stairway she purportedly climbs up and down.

It's a turn -of-the-century photograph of a young girl in a high-waisted dress with broad collar standing before a picket fence in a flower garden. A huge bow ties back her long hair.

Two more pictures hang in Elaine's Hair Deisgn on teh second floor. THese pictures, taken later, show a woman seated next to her aged fahter. She wears a dark kdress and has  bobbed hair.

Young or old, the smiling woman doesn't look like someone who would take to haunting.

Elaine Waever, owner of Eleine's ia a great-niece of Elmer Ross. There is a family resemblnace to Edith.

Because she can't keep an eye on the reception room from her beauty parlor, Weaver installed a motion detector that rings when anyone enters.

Occasionally, Weaver, sho's been a tenant fro 18 months, finds no one waiting.

The first time it happeneed, the bell rung twice.

"It was just enough time for someone to come in, walk around, and go back out," she said. "That's when I started to say, "Hi, Edith."

People have tried to convince Weaver sunlight sets off the detector. But sunlight doesn't pout through the windows until afternoon hours, and the bell seems to ring mornings.

"Somebody thought a spider might be building a nest, but I took it apaprt and that wasn't happening," she said.

"There's never any rhtme or reason to anty of it," she said. "The door doesn't open, the sensor just goes off."

Like other tenants, Weaver has found locked doors left open.

Nancy Stewart, owner of Creative Designs, is a skeptic.

"I say if she's around, she must be rfiendly," said Stewart "And she must like what we're doing here becuase she never bothereed me."

"I don;t know if this place is really haunted - people have hard and seen things they say," she said. "I'm not a superstitious type of person myself. If something falls off the shelf, I say it just fell off f the shelf." 1 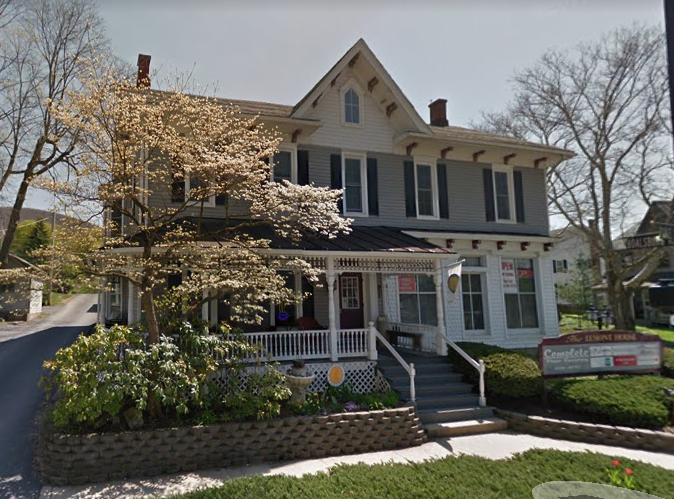