John Roberts was a wealthy Quaker and a miller. During the time of the Revolution, his lack of involvement in the war effort lead many to assume that he was a traitor, and his reputation destroyed.

This article appeared in the Reading Eagle in the 1890's:

The Haunted House of Montgomery County

Said to be Inhabited by the shades of Former Occupants  -

John Roberts, Tory, was Hanged there and His Remains Buried in the Cellar. Another hanged in apple orchard adjoining.

Phoenixville. A mile or more from Ardmore, in Montgomery county, along the picturesque Mill Creek road, to where a tiny cluster of houses, which call itself "Fernwood", stands a still substantial old stone house of Colonial architecture.

This is the old John Roberts residence, the haunted house of Montgomery COunty.

Hundreds of intials penciled on the walls and cut deep in the heavy woodwork, show that the old Roberts house has been the mecca of tourists from all over the county.

It has a place in Revolutionary history, yet the history which it helped to make is not the sort in which the Fernwood villagers take pride.

They watch the crumbling of its walls with satisfaction. They would hasten it all they could, some from superstitious motives, others merely because the place has an unsavory name and reflects no credit upon the community.

But the old Roberts house, decrepit though it is, will, if left to itself, stand many a long year yet. It will doubtless watch the funeral procession of many a villager. Into its walls and its ceilings have entered the sturdy oak which was characteristic of the buildings wrought before the days of competitive contracts, and a stamp upon its floors brings no shake or tremor.

The history of the old Roberts house is not easy to get. The original records of the place itself, and of the scenes of patriotic violence for which it formed a theatre, have been cut from the ancient archives on file at Harrisburg, probably by descendants desirous of removing the blot from their escutscheon.

When the data is finally secured and pieced together, however, it proves the Roberts mansion is twice historic - once as the place of execution of a traitor, once as the home of one of the greatest patriots of the Revolutionary days - Blair McClenahan, who with his whole private fortune aided Robert Morris in solidifying the financial system of the then young nation.

The site of the erection of the Roberts mansion is shrouded in uncertainty. Even at the time when the most stirring page in its history was turned, it was a fairly old house, and it is believed to date back to the early part of the 18th century. At one time the old structure was one of the finest mansions of the country side, and evidences of its solid substantiality still peer through the crumbling age which now enshrouds it.

John Roberts, who made the old house noteworthy, was a miller and a Tory. He was the only man atainted of treason in Lower Merion.

There were two charges against him, both treason, though in widely different forms. He was accused of guiding British soldiers through Merion in 1777-1778 to the old "Gulph" mill, where during the autumn of 1777 the bulk of the American ammunition was stored. This was just prior to the camping of the Continental Army at Valley Forge, and the supplies at the Gulph Mill are said to have been the bulk of what the Amerian forces then possessed.

According to the best available authority, this offense seems only to have created suspicion against the miller, mainly because it was not clearly proven.

It induced increased watchfulness, however, and thus aided in the discovery of the murderous and tresonable act for which Roberts was finally hanged in his own dooryard.

After the Continental Army went into winter camp at Valley Forge they were dependant for a part of their food supply upon the millers of that section. Among the flour mills selected as a base of supply was the one operated by John Roberts, who improved the opportunity to aid the British cause by grinding into the flour intended for the American soldiers glass - one of the deadliest known forms of administering poison.

He was aided in the plot by a Hession miller named Fishburn, who milled near there, and lived in a small stone house on the New Gulf road. This house, by the way, still stands fairly intact.

The Hessian reaped a fitting reward for his treason, for two days after John Roberts was hanged on a tree before his door, the Hessian met his fate in a similar manner in the apple orchard behind the Roberts house.

It is given as a part of the history of the episode that the glass ground by Roberts in his flour actually caused the death of several soldiers. Tracing the crime directly to him, a posse of frenzied patriots and citizens went to his house in the dead of night and clamored loudly at the dor. The affrighted miller, knowing well the inception of the visit, cowered in the cellar till the stout oaken door was battered down and he was dragged forth.

Without ado, and without a trial, it is said he was strung upon a large tree which stood to one side of the path still leading from the front door, and suspended there til life was gone.

It was only recently that this tree which serve as a traitor's gibbet succumbed to time. Its decayed stump still remains, however, half hidden beneath a clump of bushes.

Robert's family was allowed to claim his body, which they buried in the cellar. It is still there, and the solid slab of stone which is said to cover it lies near the foot of the rear cellar steps.

The house has had a long list of tenants in the last 75 years, that its haunted tendencies seem to have develop. Several tenants have moved in confidently, only to move out immediately again, and in one comparatively recent case the nerves of an entire family were severly shattered by the first night's experience.

Despite the fact that coal has been placed in the cellar against the winter's need, the occupants moved out in haste, leaving the fuel to the devices of the villagers. Nor could they be induced to reveal the cause of their terror.

"One night was enough for them," they said, and so they went away.

The more skeptical of the villagers speak of red squirrels, which are known to roam the house over. Those supernaturally inclined, however, hint in whispers of the lonely grave in the cellar and vow with many reiterations that neither gold nor jewels would indice them to spend a night within its walls.

Ir has been years since the last tenant braved the terrors of the old house, however, and none others are expected, The place will probably go on its way to decay undisturbed. The old miller's barn and coach house, also of stone, stand across the road, to all apperances as staunch as the day  they were built. They are now used for living purposes by two of the village families.

The ruins of the old mill where glass and four were ground together are still standing, in plain sight of the house and but a minute's walk away.

Though the article does not specifically identify the house, it is still standing along the road just north of the interesection of Mill Creek and Old Gulphs road, as does the house built in 1690 by the grandfather of the traitor.

There's only one problem with this whole story - though John Roberts was accused of being a traitor as a result of being forced by the British to lead foraging raids, there was no suggestion of his having done anything to his flour. He had long been an upstanding member of the local community and it is considered by many that the charges against him were promoted by a neighbor with whom he had been disputing property rights. There was no story at all about anything being added to the flour until around 1850 when a similar story appeared about a mill in Maryland.

Though he was hanged in 1778, it was not done on his property and he was most definitely not buried in the cellar of his house, but rather in the Merion Friends Meeting graveyard. If the house is unsettled, it could perhaps be as a result of the accusations against him, which may well have been brought about in order to make an example of his attempts as a Quaker to remain uninvolved in the war activities. Another possibility is that the haunting is being done by Roberts' employee, Fishburn, who died at the hands of the mob who stormed Roberts' house 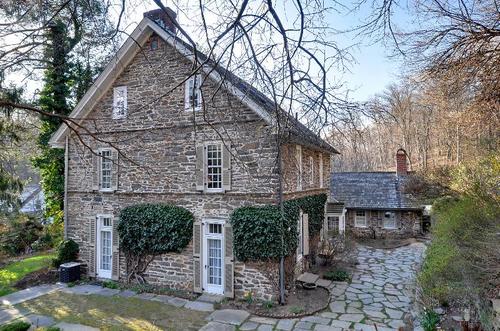