Whether it was built in 1797 or a decade or so later, as suggested by one of its former owners, there is no mistaking the notable history behind the old inn. It was apparently built by Peter Mark, but has gone through many changes of ownership over its two centuries of existence. The building is built over a spring, and at some point in its history had a pool in the basement, as well as bake ovens built into the walls. But, far more interesting to many is its history of beinghome to numerous spectral Civil War soldiers over the years.

That the guests of the Inn over the years have noted sightings of soldiers is probably not really surprising when you consider that the Inn was the headquarters of A. P. Hill during the Civil War, and that he and General Robert E. Lee held a meeting there on July 1, 1863. According to some, Lee asked Hill if he had any objections to his taking some troops into Gettysburg to scout out some footwear. Hill saw no objection and we know what happened after that.

During the Civil War era, the Inn was owned by the Mickley family, who also owned most of the land in the immediate area. From an old map, it appears that the property was owned by Abraham Mickley, and it passed in turn to one of his sons, Daniel S. Mickley. Daniel and his wife Ruth sold the Inn in the 1940's and its has changed hands quite a few times since then. It has also gne through a number of name changes over its history, being known  as the Willow Grove Hotel. the National Hotel, and Dr. Franklin, besides its traditional name. It was that first name of Cashtown that ultimately named the town, as the Inn first got the moniker because its first owner, Peter Mark, would only accept cash from the visitors to his establishment. The name stuck.

Of interest to genealogists like myself is the fact that throughout most of the property's existence, it has been in the possession of someone in the family, through the connections of the many inter-related families in the area. It wasn't until 1987 that it was finally sold to an outside interest. What was of particular interest to me is that I have a very distant connection to the Mark family through my Cumberland county Nevin ancestors, and to make things even more entertaining, my mother-in-law is a direct line descendant of the Mark family! 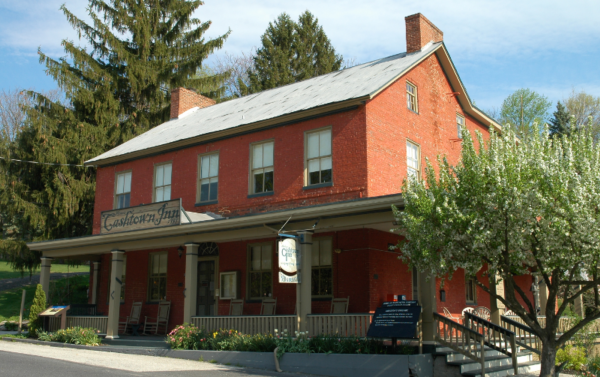