Also known as Covatta's Brinton Lodge, the Lodge was run as a gentleman's club for many years prior to being turned into a restaurant by the Covatta family. it had been a private residence for many years when Caleb D. Brinton purchased it about 1927. In 1972, the flood waters resulting from Hurricance Agnes wiped out Brinton's investment as there was no flood insurance on the property. Brinton died in October of 1974 and is rumored to be one of the several ghosts that haunt the property. It is suggested that he is upset that his private lodge is now open to the public, but he doesn't seem to be that upset as he has been seen tipping his hat while wandering through.

A number of articles floating around the web concerning the Lodge discuss the various ghosts that are said to be there in addition to Caleb. There is Dapper Dan, the ladie's man, an older lady who appears mostly at the top of the stairs and is said to be Caleb's mother, and a young girl rumored to be a daughter of Caleb's. I haven't been able to ascertain if Caleb actually had any children at all, though it is said that he was married to a woman named Ruth and in later years had a companion named Lillian Moore who stayed with him at the Lodge. More research is needed to find out who these various folks are.

Caleb's mother lived with Caleb for several years before her death in 1944, his father having died many years earlier.

An article from 1933 in The Mercury (Pottstown, PA) sheds some interesting light on the Lodge:

Blanche V. Lessig, 40, of 201 North Fourth strret, Reading, formerly of Pottstown, is suing Caleb D. Brinton, 40, of near Douglassville, for $25,000 on a brechof promise charge.

Suit asking for the heart balm was files in teh Berks county courts yesterday by Miss Lessig's attorneys. The plaintiff charges Brinton promised to marry her when she obtained her divorce from Joshua Bliem Lessig. After she received her divoce decree in 1927, she said, she lived with Brinon in a roadhouse which he operates along the River road in Chester county.

From August, 1927 until June, 1932 the brief charges, Brinton introduced her as his wife and promised continually to marry her. She said Brinton paid for her divorce and it was on his promise of marriage that she lived with him.

Recently, however, she charged Brinton became infatuated with another woman and she was asked to leave.

Perhaps the other woman Lessig mentioned was Lillian, or maybe Blanche is one of the spirits who haunts the Inn if she was sufficiently upset by Brinton's actions.

Many of the articles that appear about the Lodge state that Caleb never returned to the Lodge after the tropical storm Agnes did its damage in 1972. Most of these same articles state that Caleb died in 1975. Neither are true - Caleb DID return to the lodge because that is where he was when he died on October 26, 1974:

Services for Caleb D. Brinton, 81, who died Saturday in his Brinton Lodge, Douglassville R.D.1 residence, will be held Tuesday at 11 a.m.

The Rev. Allen Moyer will officiate in the Houck Funeral Home, Pottstown. Burial will be made in Sadsbury Friends Burial Grounds, Lancaster County.

Born in Gap, Lancaster County, a son of the late Charles and Annie (Dickinson) Brinton, he had been the owner of the lodge since 1927.

Recently, the Lodge has been re-opened but not as a restaurant this time - now it's open as a haunted attraction. Wonder what Caleb thinks about that! 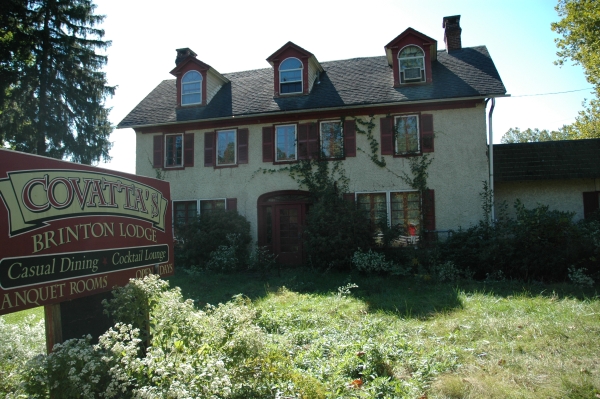