Depending on what part of St. David's you are looking at, it might be in Chester, Delaware or Montgomery counties as it straddles the line where the three counties come together. The old original church now falls into Radnor township in Delaware county, but the bulk of the graveyard lies within Chester county in Easttown township, and, just to be confusing, the modern St. David's is in Montgomery county, across the street.

One of the prime candidates for haunting this are is the legendary general Anthony Wayne of Revolutionary War fame. Many of his descendants are buried here as well.

'Mad Anthony' Wayne's military history is the stuff of legends, but I'll let you do your own research there if you want to know more - it is what happened after he died in 1796 that becomes rather bizarre.

Moving forward thirteen years to 1809, Wayne's daughter Margaretta is quite ill herself (she died the following year and was buried at St. David's) and makes a request of her brother Isaac to bring their father's remains back to the family burial plot at St. David's in Radnor. No doubt expecting his father's body to be fairly decomposed after thirteen years, Isaac makes the trip in a light wagon, however things did not turn out quite as planned.

Isaac arrives at Erie and enlists help from a doctor, and possibly several other people, in exhuming the body of Anthony. Despite the passage of thirteen years, the general's body was nearly perfectly preserved and it was quite obvious that Isaac's small wagon would not be large enough to carry the body back to Eastern PA. At this point, the story takes a decidedly odd twist.

It is decided to send only the bones back East with Isaac. This is accomplished by cutting the body of the general into pieces and literally boiling the flesh away from the bones! (Sorry, but I did warn you!). The question arises of whether or not Isaac knew about the entire process or was simply presented with the bones after the fact, but it is known that the flesh itself along with the instruments used were re-interred in the gravesite by the flagpole in Erie.

Burial number two took place at St. David's in Radnor when Isaac returned, an event attended by a large number of dignitaries of the area. Supposedly, the good general stills roams around the area of St. David's, looking for himself.

Considering the entire story, it is certainly easy to see how the legend of General Wayne's ghost grew - that would be one mighty confused spirit, I would think! 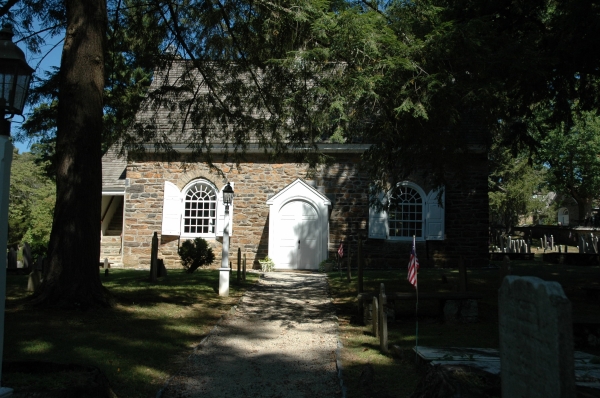