The area known as Furnace Hills, outside of Westminster  along the road to New Windsor, has had a repuatation for being haunted for more than a hundred years, and it seems, the tradition continues to this day.

Legh Master was born in England in 1717 and came to America to seek his fortune, purchasing about 6000 acres in the area. He established an iron foundry on his property about 1765. finding an abundance of iron ore in the area.

Stories about Legh Master were common , even as early as 1882, when the following appeared in Thomas Scharf's History of Westminster1

"He owned considerable mountain land, and old Ben Biggs used to tell a queer story about his wrapping himself up in a white sheet and going throught he woods at night, crying: 'Stick, stuck,' which scared a great many timid people, and  secured for him an unsavory reputation. He was a great wag. One poor fellow,a little superstitiuss, in going through a woods from a neighbor's house, with a long pole balanced over his shoulders and hung full of shad and herring, ran against Master's ghost, and hearing his voice shouting 'Stick, stuck,' was so frightened at this strange apparition that he took to his heels, and dropped all his fish on the ground in his rapid flight, hallooing to his old woman, as he came in sight of the house, for God's sake to open the door, as Legh Master's ghost was after him."

Master bought slaves to work in his mines, and the mines soon became well-known, as the story continues:

"Among the slaves who worked in the furnaces at 'Furnace Hills' was one 'Sam', an object of special dislike to his master, the owner of the property. From what cause his violent dislike sprang tradition does not tell, but Sam disaapeared very mysteriously one dark night, when the furnaces were in full blast, and from that time Leigh Msater was never known to mention his name. Years rolled by, and after a long life he died, on the morning of the 22nd day of March, 1796, in the eightieth year of his age. In all probability his name would have perished also but for the vague rumors concerning the sudden and mysterious disappearance of this ill-fated negro, and the strange  scens and extraordinary sounds which followed so closely upon his death, accounts of which have been handed down from father to son through all these years, and have probably gathered strength in their travels. Suspicions of a desperate deed committed by Leigh Master during his lifetime began to be whispered about, and old men remembered, or thought they did, a scared and haunted look in his eyes, which they attributed to the constant dread of discovery of his miserable secret. And this the rumor spread, gathering as it went, until it was told that Master had taken the life of his despised slave, and had cast him into the furnace, that he might hide all races of his crime."2

Additional stories about Mater suggest that his dislike of Sam arose from his interest in Sam's sweetheart, one of his domestic servants, who rejected his advances. In his anger, she was beaten, the news of which caused Sam to seek his own revenge against Master.

Years later, a grisly addition was added to the story:

"An eerie footnote was added to this legend in the 1930's, when a fire broke out in the kitchen of Legh Master's mansion. After the initial fire was extinguished, the firemen removed some bricks from the chimney to check for sparks. They stood back in horror and amazement, for there, before them, was an iron grate. When it was removed, they found an old oven -- and in the oven were the remains of a human being."3

After his death, Master was originally buried on his own estate, but it appears that, soon after, the ground itself rejected him as his bones rose to the surface, supposedly on three separate occasions. Finally, townspeople carried his earthly remains to the churchyard of Ascension Church in Westminster. Evne there it appears that his soul may not rest untroubled as the stone covering his grave has cracked in numerous places.

Stories have been told for years that Masters rides over the hills between Westminster and New Windsor on dark windy night and residents watch for a dark grey horse, breathing fire, and led by one of more imps carrying lanterns, as Masters roams endlessly looking for his lost soul.

Even after all these years, with many homes built in the area, it seems there is still a vestige of Legh Master's influence in the area as numerous residents in Furnace Hills and the Greens have experienced oddities in their homes, most often doors that open and close without human intervention, footsteps, and cold spots even in the heat of summer. 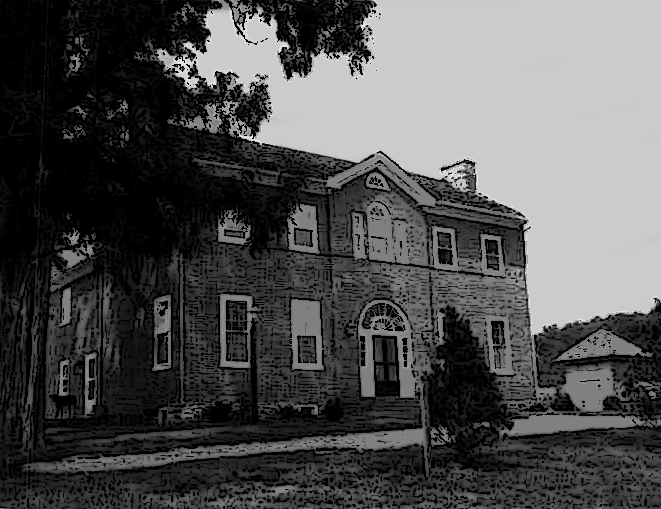