York County would have preferred to continue being best known for its cigar factories, but a trial in the late 1920's changed all that as a battle between competing "pow-wow' practitioners resulted in a violent murder.

The Rehmeyers were well-known and in the area and Nelson Rehmeyer had a reputation locally of being a powerful "pow-wow" man, the term used to describe those who practiced the supernatural practice of hex magic, but he was not the only one in the area by any stretch. John Blymyer (or Blymire), who had worked for Rehmeyer for a time on his farm, also came from a long line of local "pow wow" men.

The house in which Nelson Rehmeyer had lived sits very close to a winding York county road that twists its way through the woods in the hollow. It is a desolate place and locals tend to give it a wide berth after dark. The house is kept in good shape. Numerous plans to convert it into a museum have not come to fruit at this point, though the efforts continue.

Blymyer came to believe that there his family had been hexed by Rehmeyer and, in the company of several others, sought to remove the problem. The article included below, from the Huntingdon papers, gives an interesting look at how the murder trial progressed in the York County courts:

State Omits Reference to "Pow-Wow" Aspect of Case, But Witness Allows It To Leak Out

"We'll get a lock of the old man's hair. That will break his bad luck spirit."

Those were the works of John Blymyer, admitted pow wow doctor as he and two others started for the home of Nelson D. Rehmeyer, 60 year old farmer recluse and practitioner of the black arts, on November 27th last when Rehmeyer was beaten and burned to death, it was testified today by Clayton G. Hess, 25-year-old lumber company foreman.

Hess is the star witness in the trial of Blymyer for first degree murder. Blymyer later admitted he "got the witch," Hess said. Two others accompanied Blymyer to the "murder farm." They were Wilbert Hess, 18 year old brother of the witness, and John Curry, 14.
---
York, Jan. 8 This prosperous town which would so much rather be known for its cigar factories than its black magic fought hard all day yesterday against the witches which were hovering around the handsome court-house. But it lost the fight in a final rushing hour of the first day's session of the trial of John Blymyer, tall, pasty-faced, sharp-nosed, tiny-eyed master of witchcraft, for the murder of Nelson Rehmeyer, himself a dabbler in the supernatural.

York was determined that it was not to be advertised to the world as the witches' den of America and to that end it developed not long after the Blymyer trial opened yesterday that the State had determined to make robbery the motive and to leave out all mention of witchcraft of possible in its attempts to prove Blymyer a murderer. Things moved swiftly.

Blymyer, John Curry and Wilbert Hess were indicted in twenty minutes by the grand jury. Promptly at 11:00 MA, the work of getting a jury began and on the stroke of 3:40 PM, the last of twelve substantial citizens of more than middle age, largely of German descent, and one 25 years old, were sworn in as the jury. Women do not serve on jury panels here.

Not a question touching on any possible belief in the supernatural was asked in examining prospective jurors.

Until that moment York was on top in its battle to keep the witches all well exorcised and not a sign of a broomstick rider had been seen.

But then things began to happen. Amos Herrmann, broad-shouldered district attorney who feared no man but was very serious over magic at that particular time, in a thoroughly disinterested fashion told the jury that he would prove Blymyer guilty of murder.

He outlined the case in some detail, promising to prove that Blymyer bought the rope with which Rehmeyer had been trussed up after being beaten into unconsciousness, and how Blymyer allegedly wanted to return Thanksgiving night to the scene of the murder and burn down the Rehmeyer house.But so careful was Herrmann to delete from his statement any reference to the lock of hair which Blymyer, Curry and Wilbert Hess had intended to pluck from Rehmeyer's head and bury eight feet deep back of the Hess hen house as symbolic destruction of one who had cast a witches spell over the Hess family and possessions that he forgot to name a motive for the murder.

Herbert Cohen, defense attorney, was about to call his case when the court asked Herrmann if there was a motive for the crime.

"Oh yes," he said, " in the stress of all the excitement I overlooked that. I will prove that there had been a sum of money in the house and that it was taken and divided among the three accused men." That satisfied the legal requirements and the witches had been kept out by just that narrow margin.

Things went better then, until Clayton Hess, brother of Wilbert and member of the Hess family which had engaged Blymyer to raise the spell they thought Rehmeyer has cast over them, was called as th last witness of the day. Clayton, a tall, rangy lad of about 20, red-faced, with a shock of brown hair, and with a bit of antagonism in his voice admitted he drove Blymyer to a spot in the woods near th Rehmeyer home.That was the Tuesday before Thanksgiving and the night of the murder.

Thanksgiving night, Blymyer came to see him."He wanted me to drive out and see if the Rehmeyer house had burned down." Clayton said. "He said if it had not he was going to burn it down. He said too that he had got the man and he said a name."

"Yes, he said he got the man and he said a name," answered Clayton.

"What was the name?" asked the inquisitive district attorney.

"Shall I say the word?" asked the cautious Willard.

Spectators got ready to blush as the district attorney told him to go ahead and say it right out loud.

"Well, he said he got the witch," said Clayton.

Right then and there the district attorney indicated he was willing to adjourn court for the night and he retied quickly from the scene, leaving the courtroomr, the witches, the hob goblins, and the kindred spirits which York does not care to have people talk so much about.

Alice Rehmeyer widow of the murdered conjurer, had been the first witness called. She was a little wizened-up woman, dressed in black. Her little eyes, in a pinched and wrinkled face, peered brightly form beneath an overlarge black hat.

During the afternoon she had sat in a front row with her tow daughters. The older was dressed in black, a young daughter was attired in a brilliant orange dress, red hat with silver trimmings, and black stockings, a decided study in colors. Mrs Rehmeyer had seemed in high spirits for a time and laughed and smiled with her thin-lipped sunken mouth. Then, when she heard the district attorney describe the murder of her husband, she wept into a handkerchief which either through nervousness or by intention, she had carefully folded into a triangle and then twisted in a long roll.

On the witness stand she used that handkerchief to dry her eyes, then looked out over the courtroom, and awaited the first question. A sharp, penetrating, high-pitched voice shrilled the answers. Sometimes it would carry away into a weird whistle. Perhaps in another case it would not have been noticed but it added its part to the eerie atmosphere of this unusual trial.

Her testimony was brief. She told how Blymyer had come with a man named "John" to her home, next to Rehmeyer's farm, the night o fthe murder. They asked where Rehmeyer lived and she told them. She identified the keys to Rehmeyer's kitchen door, for a purpose not yet clear.She also revealed that she and her husband had not lived together for four years prior to his death. She had moved with her daughter to an adjoining farm which they owned, leaving the giant, black-bearded, heavy-haired Rehmeyer alone with his magic and his studies in witchcraft. She and her husband had remained on friendly terms however, seeing each other frequently. She was ready to explain why they lived apart, but the Court realized it was nobody's business.

Frank Lehr, clerk in a hardware store, was given a piece of the rope with which Rehmeyer had been trussed up after beign beaten into unconsciousness and identified it as similar to a sale he made the day before the murder to Blymyer and an unnamed companion.

Then came young Clayton Hess, and with him the first entry of the witches into the day's proceedings.

Through the court session Blymyer sat between an attorney and a deputy sheriff, keeping up a lively interest in everything. As each prospective juror was called the bailiff went through the formula: "Juror, look at the prisoner; prisoner gaze upon the juror; challenge or no challenge?"

Each time the formula was repeated and it was done forty five times in the process of jury picking. Blymyer would rise, standing painfully erect, point his long sharp nose at the juror and look sharply with his small eyes. He is a pasty-faced fellow with stringy blond hair, a small chin and sloping forehead. His most noticeable peculiarity of form is his exceptionally long arms tipped with a small-palmed hand and fingers of amazing length.

At times he would rub his chin with those long fingers, again he would toy with his "salt and pepper" cap which rested on his knees. He was dressed in grey with soft collar and dark four-in-hand tie, neat but not gaudy.

Blymyer plainly could not be a strong-minded man, might be taken for a man a bit eccentric, but he seemed like one too timid to do murder, and more likely to run away from ghosts and goblins than to call them around him as a practicing witch doctor.

The trial is set in a building and a courtroom far too modern to fit into its theme.

The courthouse is a handsome, white stone, tall-columned structure, which even York, which is justly proud of its architecture, is ready to acclaim. The courtroom s large,as courtrooms go, having a large seating capacity of 200 spectators and much room for court, jury and lawyers behind its massive oak rails. The bailiff sits in a marble stand, the witnesses within a marble booth.

The judge, Ray P. Sherwood, tall and pleasant, wears trailing black robes with dignity. Court is conducted with due solemnity but without irksome restrictions.

The crier proclaims the opening in measured words but perhaps it is just imaginary fervor he puts into the prayer: "God save the Commonwealth and this honorable court." 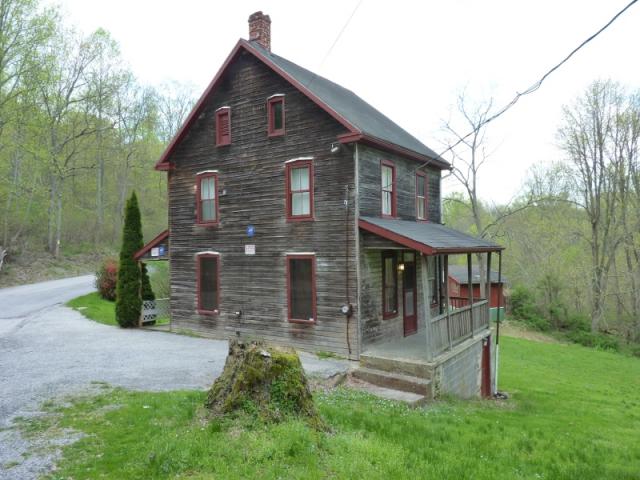