There are some families that just seem to attract the unusual and the historic Wayne family of Chester County seems to have garnered far more than their fair share of unusual happenings. From the bizarre nature of the Revolutionary general's burial ( a story I'll cover elsewhere) to the family's ancestral home, any place attached to the family seems to be affected.

General "Mad" Anthony Wayne made his home in a large mansion known as Waynesborough just outside of Paoli, on land that had been in his family for many years. After the General died in 1796, the home passed to his son Isaac, and after Isaac's death, the property came into the hands of Isaac's grandnephew, William Evans, who took the name of Wayne in order to carry on the family name. William was the grandson of Isaac's sister Margaretta, through her daughter Mary.

The property remained in family hands until 1965, when it was purchased by Orrin Wickersham June and extensive renovations were undertaken. Despite the major work done on the house, Mr. June's wife, who was a Wayne descendant herself, never lived in the house. Perhaps she was driven away.

As the story about the house goes, there was a woman named Hannah who lived in the house in the 1800's who came to a sad end. While looking for something in the attic, the candle she held ignited some papers and the poor woman desperately tried to put out the flames surrounding her. In her struggles, she kicked out the window to get to some fresh air, but the smoke of the fire overcame her and she perished. Female guests to the house have heard the sounds of shattering glass, though men have not heard a thing. Sometimes, muffled sobbing is heard along with the glass breaking, but, again, only by females. These incidents have been reported over the years, and at least one of them happened during a dinner party held by the June family, so perhaps it is understandable that Mrs. June was not comfortable staying in the house.

Researching the history of the families involved in Waynesborough turned up quite a bit about the various people involved, including the identity of the unfortunate Hannah. She was the wife of the above-mentioned William Wayne and her maiden name was Zook. She and William were married, probably in the 1850's, and had at least two children, Mary and William. Their grandson William III was the owner of the house when it was finally sold in 1965 to Wickersham June.

Unlike many stories of haunted properties that seem to have no basis in reality, Hannah Wayne did exist and she did come to a very sad end in the house. The following article, from the Philadelphia Inquirer gives the details:

Sunday morning at 10 o'clock, Mrs. Hannah J. Wayne, wife of Major William Wayne, grandson of "Mad Anthony" Wayne of Revolutionary fame, died at Paoli, at the age of 60. She died in the old Wayne house and her death was caused by her devotion to its traditions. Saturday afternoon the old lady went into the attic for some family papers. It was dark and a candle was necessary. Some of the papers ignited and there was danger, not only that some of the family records would be destroyed, but that the historic house itself was doomed. With great effort she alone succeeded in extinguishing the blaze but suffered some slight burns. Although the wounds were not serious the shock of the ruin and excitement was too much for her, after lingering until the next morning, she died peacefully. Major Wayne has been an invalid for some time and is prostrated with grief over the loss of his wife.

The article gets most of the details right, though Hannah was not the granddaughter of the General, but rather the wife of the great-grandson, and she was probably a bit older than 60 at the time of her death as her birthdate has been show as 1834. Both Hannah and her husband William are buried at St. David's Churchyard in Radnor. 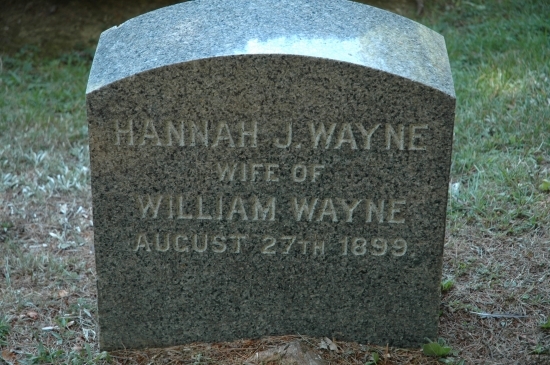