A violent murder in 1855 has provided a wealth of stories in the North Coventry area. At the time of her murder, Hannah Shenkel (often spelled as Shingle in early records) was in her early 60's and had been living alone, a spinster, for years. In her early years, she was said to have been very attractive to the local young men, but she chose instead a solitary life and developed a reputation for being eccentric. On October 21, 1855, one of the few neighbors she trusted, Mr. John Miller, came by the house to check on her, but got no answer at her door. He feared the worst and summoned a few neighbors to join him in a search for the old woman.

Working together, the neighbors broke through the locked front door, finding a stew simmering on the stove and a fire in the grate, but an eerie silence prevailed. Cautiously mounting the staircase, they found Hannah's body, covered in blood on the bed in her little bedroom. Her head had been crushed and almost severed from her body. Blood dripped to the floor from the bed and splattered the walls of the small room. Apparently the intruder had used a ladder to gain access to her room and from the looks of things, Hannah had probably put up a fight, though her trusty hatchet, so often used for her own protection, had probably been used against her in the end. Though many suspects were questioned, no answer to the crime was ever found.

An article from an 1879 Chester Daily Times paper carries a related story:

The Ghost of Hannah Shingle

The following is from the Pottstown Ledger of Monday:

"From a trustworthy correspondent of the Ledger, living in North Coventry township, Chester County, hear the spot at which Miss Hannah Shingle was so brutally murdered more than two years ago, comes the following 'spook' story: Since the mysterious Shingle murder, at various times, many persons have declared that they have seen a 'spook' or an unearthly object which answers that description at a brook which crosses the road leading from Temple Church to L.L. Bachman's store. On Saturday evening last as Mr. Montgomery Campbell was returning from J. Bush's cider mill, at about 9 o'clock, to his astonishment he saw the spook of which he had often heard but never seen. Mr. Campbell was not scared, but immediately stopped his horse for the purpose of interviewing the object, which he declares was white as snow, four feet high, and about three feet wide. It was mounted on a fence and no head or limbs were apparent. Mr. Campbell propounded several questions to the intruder but received no answer, so he drove on. "Having seen the spook with my own eyes," says Mr. Campbell, "I am now convinced that there is such a thing, and no matter what others may say, I am going to stick to that opinion."

At some point prior to 1974, noted spectral investigator Edith Lorraine Warren came to the area and her responses to Hannah's property were captured by local historian W. Edmunds Claussen. After stepping out of the ancient springhouse on the old farm, the conversation ran as follows:

"Did you sense death in the spring house?" I once again asked.

Mrs. Warren shook her head "No. Her killing did not take place in the room. That was used for other purposes."

I stood very close to Mrs. Warren for I was trying to interpret her faintest change of expression, seeking if possible to read the slightest gleaning of new thought of our story of the long-ago murderd Hannah Shingle from any loose vibrations I might be catching as they passed between us.

With no prior knowledge of the area, Mrs. Warren picked up rightly the bizarre history of the area that was once known as 'Free Love Valley', but we'll save that story for a later telling. 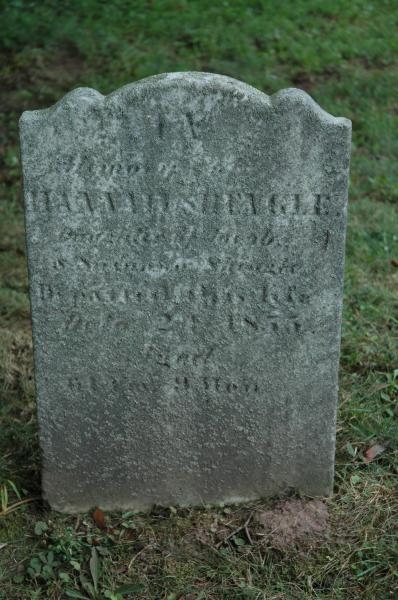