I have no idea if there has ever been any trace of ghostly activity at the former residence of Dr. Harry Zimmerly, but based on the history of his activities in his rural community, it would certainly not be surprising if the place was filled with supernatural beings.

The general public became aware of the doctor's activities when an investigation was started after a woman named Gladys Lawson, who had gone to the doctor, disappeared. Ms. Lawson had first gone to Zimmerly in February of 1935. The following month, she returned to the doctor but was never seen again. Her sister, Mrs. George Crawford, alerted the local authorities and the search for answers began.

Lancaster, June 12 (AP) - Science today wrote its chapter in the commonwealth's tale of horror and agony attending the midnight death of Mrs. Gladys Lawson, Calvert, Md., and the destruction of her body.

Dr. John W. Rice, bacteriologist of Bucknell university, testified fragments sifted from ashes in the driveway of Dr. H. C.    Zimmerly's home at Mechanics Grove, were human bones and "from a person of rather slight build, of female sex and adult age."

Zimmerly is on trial on two charges of performing illegal operations, one of which, the state holds, brought death to Mrs. Lawson.

"The legs of the body," Rice testified, "were dismembered sufficiently to be placed in the furnace by cutting across the large bones with a rather coarse-toothed saw such as the carpenter's saw found in the Zimmerly garage."
Jury See Saws

The saw to which Rice referred, as well as two large butcher knives which witnesses said were missing from the kitchen of the Zimmerly home March 16, the day after Mrs. Lawson was alleged to have died alone and in agony, were laid before the jury earlier in the day.

Rice also testified a lard can which State police found in the Zimmerly cellar contained "decomposition products of carrion or flesh brought about by putrefactive bacteria, mites and larva of flies."

"The thin crumpled tissue isolated from these contents is human dermis," he added.

Disheveled and shifty Richard Parker, Zimmerly's hired man, who explained he was "suffering from narcotics for many years," told of administering "twilight sleep" to Mrs. Lawson and of helping Zimmerly carry a woman's body to an upper room where it was deposited on papers placed on the floor.

Parker and Miss Blanche Stone, whose testimony on the midnight moaning of Mrs. Lawson as she lay alone in Zimmerly's house, sent Mrs. Clara Crawford, a sister of the missing woman, shrieking from the courtroom, both testified that they were with Zimmerly the night they said Mrs. Lawson died.

On that night of March 15, Miss Stone said she, Parker and the stooped gray country doctor sat in  a dim downstairs room where they could hear "Gladys Lawson moaning." Then Zimmerly went upstairs, she said, and "the moaning stopped," just before the doctor returned to announce "she is gone."
Parker said he saw Zimmerly working "over what looked like a body," while he heard a "sawing" noise. The "handyman" stubbornly refused to say, however, he "actually" saw a corpse dissected.

Miss Stone said she was not afraid to work at the "haunted farm' because "I'm not afraid of ghosts," but she testified she "could not bear" to remain in the room where the Calvert mother was "because of her moaning."

A neighbor, Mary Adams, took the stand to tell of Zimmerly and Parker bringing two butcher knives and a saw to her for sharpening "about March 16."

Mrs. Crawford identified clothing found in the Zimmerly home as the property of her sister.

There are many articles available in newspaper archives reagrding this case, so consider this merely the tip of the iceberg. 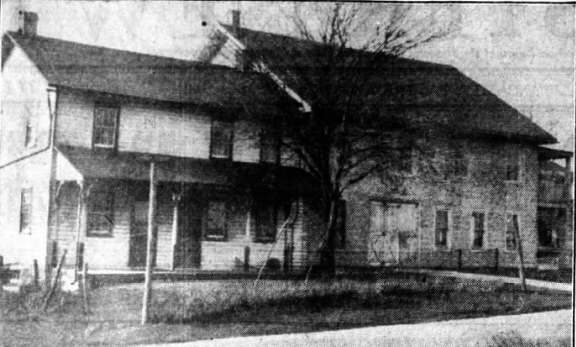